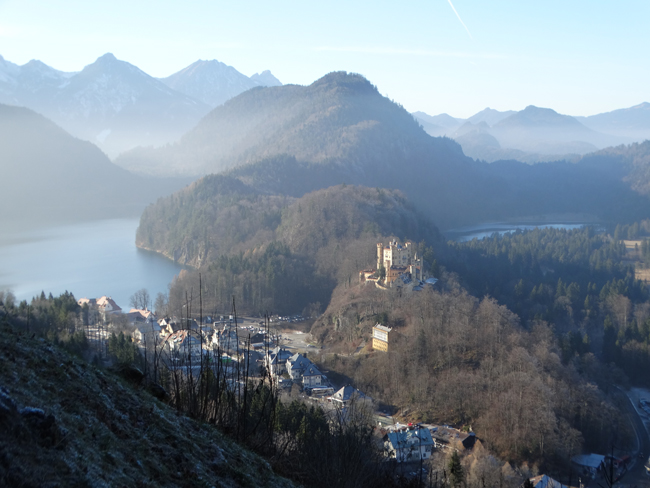 Munich is a destination usually reserved for visiting during October, when beer steins, lederhosen and rank public toilets dominate the itinerary. Visiting in December however brings different delights – can you say glühwein, wurst and Weihnachtsmärkte? During our long weekend we also learned how to say, “I can’t possibly wear any more layers” and “Another dark beer, bitte!”

It was cold, very cold. However there is only so much sticky, rich and sweet glühwein you can drink to help warm you up in one stroll from our first stop at a mock log cabin built on Karlstor before heading towards the heart in Marienplatz. Karlstor, or Karls Gate is part of the medieval city wall and fortification used until late in the 18th century. Now bordered by straight-laced modern buildings and rising above a McDonalds and souvenir kiosks, it loses some of its assumed former dominance. It does however offer some character and life to the pedestrian zone beyond.

Continuing towards Marienplatz from Karlstor took us past several Christmas market stalls, the smell of gluhwein, waffles and sizzling wurst flowed over us as we inspected wooden toys, traditional ornaments, boutique gifts and chocolate and sweet stalls. On one side the shop front windows of a large department store had been given over to cotton-wool snow and blue sky backdrops showing off animated toys that kept many children and children-at-heart entertained. On the other side was St Michael’s Church, the façade is grand, but still doesn’t prepare you fully for the sumptuous interior. It offers a calming break from the hustle outside, the grandiose altar rises ever higher and you can also go downstairs to see the crypt of Wagner patron and Neuschwanstein Castle builder, King Ludwig II.

The waves of people continued to ferry us towards Marienplatz, the heart of the city and dominated by New Town Hall, Neues Rathaus. This would be one of those buildings held up as a quintessential example of the romantic vision of Europe from me as a child. The ornate decoration of the walls, mesmerising Glockenspiel and intricate details make it one of the world’s more notable government buildings. We made the trip to the top of the tower, surveying the fairly standard city views just long enough to carefully look straight down to the twinkling markets below before freezing solid. The inner courtyard was a good spot to find gargoyles close enough for a goofy selfie.

It seemed each street we headed down we would find market stalls drawing crowds in front of starkly contrasting buildings – the mixture of old world architecture jammed up against the brutal and boring ideas of more recent times. A feature of the rural Bavarian buildings is painted scenes on the walls and we saw a few examples in the city too. A saving grace could be the impact such beauty has when surrounded by other such conformity, letting it stand out even more.

We relished any sunshine, sometimes lucky to find somewhere to sit and people-watch, coaxing any warmth to be had while, enjoying several small mugs of gluhwein during our forays into the markets. I can definitely recommend the sausages with mustard and sauerkraut on a bread roll too, so very tasty!

Munich has some lovely gardens – which must be quite inviting during the summer for a picnic and a spot of frisbee…but in winter we barely had time to pose for a photo in the grounds of the Hofgarten before scurrying off again to keep warm.

A big bonus to visiting Munich is the day-trip-ability to nip the few hours down the road, towards the Austrian border to that Disney muse, Neuschwanstein Castle. As a child I had a constant fascination with Europe. As an adult, it continues. My parents took three months off to leave us with our grandparents and have a blast over here in the 1980’s. Parts of Germany were off-limits, squat toilets abounded and dad lugged a bulky, heavy VHS recorder around to capture it all on tape, to hardly watch it again back home anyway. He grew a beard worthy of modern hipster jealousy for the first and last time too…must be a European thing.

There were several places they went and names of towns that stuck with me and triggered a love for history and far-away places for me. I love witnessing the modern-day results of different eras of architecture, literature, art, culture and religious fervour that have shaped so many countries next door to each other, trying to keep their identities intact and unique through the centuries.

Neuschwanstein Castle is a 19th century masterpiece, built in part as a homage to composer Richard Wagner – you know, the guy who composed the music for the flying toasters screen saver – and as Ludwig II’s private retreat. Ludwig II paid for it with his own funds and died shortly after it was fully finished in 1886, living there for only 172 days. Wagner died in 1883 and never got to set foot inside. Perhaps a little less royal approval of every draft and change would have helped speed up the 17 year construction time and both could have enjoyed it a little longer before it was descended on by upwards of 1.3 million visitors a year.

However he wouldn’t have lived long enough to stop it being used as storage of Nazi plunder during WWII – a fact not mentioned on the guided tour of the interior – we found out while watching the very enjoyable movie, The Monuments Men. Ludwig II’s death also meant several features of the design were not realised, not that it detracts from the current mammoth pile of bricks, Salzburg marble (465 tonnes!) and sandstone.

Among the suite of rooms you can see inside – but not photograph – are the Throne Hall, Bedroom, Grotto and Hall of the Singers. These are the most memorable for me with their ostentation – though that’s nothing new for a royal palace – their peak level of ornate decoration and sheer over-the-topness. The Throne Hall is sumptuous with a chandelier designed on a Byzantine crown, intricate mosaic floor and lavish wall and celestial ceiling paintings.

The bedroom is dark and surprisingly intimate in terms of size, as compared with other palace bedrooms. The bed seems short, but it’s an optical illusion due to its height – it looks like a decorative cage with the ends panelled in carved wood and the canopy is covered in intricately carved wooden gothic-style turrets, which frankly look like a dense forest of pine trees.

The Grotto was the most surprising, and by comparison tiny, room in the castle. Purely theatrical, it was created to look like a dripstone cave based on the idea of the Hörselberg in the Tannhäuser saga by, you guessed it, Wagner. It was colourfully lit and had a waterfall originally.

The Hall of the Singers was the final stop on our tour and a grand finale indeed. A large room, flooded with light from large windows and views cascading down into the valley and up to Marie’s Bridge across the gorge. The legend of Parzival and the Holy Grail is depicted in the wall decoration and the signs of the zodiac cover the ceiling. It was never used for musical performances or lavish parties, rather it was Ludwig II’s monument to his fascination with medieval knights and legends.

As we made our way out of the castle – and if you’re ever visiting yourself – be sure to head towards the café…and keep going to get to the balcony outside. It may be shallow and you’ll jostle with other tourists even in winter, but the views are worth it as they span around from Marie’s Bridge and over the Alp lakes, with the backdrop of stunning Austrian Alps and along the valley floor. Spectacular.

The hike to the bridge afforded more vistas over the landscape, which give you the perfect excuse for a break to catch your breath. We had to climb over a low wall, behind a temporary fence and and ‘road closed’ sign to get to the path to the bridge because the way was in fact closed due to the sides having collapsed slightly in places. Since the path was fine if you didn’t feel the need to actually throw yourself over the side, it was quite an over-reaction to close it off…and indeed had done little to stop people making the trek to the bridge, including us. The bridge itself is a test of your vertigo tolerance but is a great way to see the castle perched high on its rocky hill, framed by the views beyond.

Schloss Neuschwanstein may have been the star of the day trip show, but the support players were marvellous in their own rights. Our first stop along the Bavarian Romantic Road was Rottenbuch Abbey, founded as an Augustinian monastery in 1073, the Abbey church was constructed between 1085 and 1125 in the Romanesque style. The elegant and simple exterior didn’t prepare us for the extraordinary high baroque style interior which was created in the 18th century and is a glorious example of fine stucco work. It may have seen several centuries come and go, and its library was pulped at a paper mill in 1803 following secularisation, and today continues its work as the – rather fancy – parish church. As we visited on a Sunday, the bells pealed and locals trickled in for their morning service as we left them in peaceful prayer.

Traditional May poles feature in each town, their blue and white painted trunks soaring to dizzying heights with beautiful plaques displaying local crafts and industry.

Unless you’re a pilgrim yourself, it would seem the Pilgrimage Church of the Scourged Saviour – or more snappily aka Wieskirche – sits somewhat off the beaten tourist track for such a grand and imposing building. Far from its 17th century origins as a small chapel, today’s church arose as a pilgrimage destination following a supposed miracle of the Scourged Saviour crying tears of pearl during prayers in 1738. As they couldn’t prove nor disprove it, and as often happens with enough religious fervour, the legend stuck. I’m sure it’s a lovely sound when the pipe organ plays though its probably best not to stare at the pained figure of Jesus in chains at the same time if you’re in the mood to feel uplifted.

Our final stop on the way home was delicious. Schönegger Käse-Alm is a family run cheese farm serving dark beer brewed by monks and platters of various cheeses and sausage with heavy brown rye bread. Our small tour group and guide Gunnar shared a bench table and conversation, a thoroughly lovely way to finish off a long day. Of course the wonders of free movement in the EU presented an unmissable opportunity to buy chunks of cheese, sausage links and another couple of bottles of beer to bring home. I still can’t get over not declaring – and not having confiscated from us – dairy and meat products at an airport. Stuff you Brexit!

Back in Munich city centre we dropped in on the Pink Christmas market, complete with sultry Santa drag queen and cringey back-up Grinch – his costume was well-done, the cringing came when he tried to sing – mercifully only one song – definitely a quirky way to round off a big day of history, breath-taking scenery and grandiose interior decorating.

With the sunshine beating down the next morning we continued strolling around the city streets, finding more churches, gluhwein and wurst with sauerkraut to enjoy. Munich is a pleasant city, offering something for everyone and I would imagine a very agreeable place to live with history, culture and festivals to enjoy. If only I had a few more layers to wear during the winter!