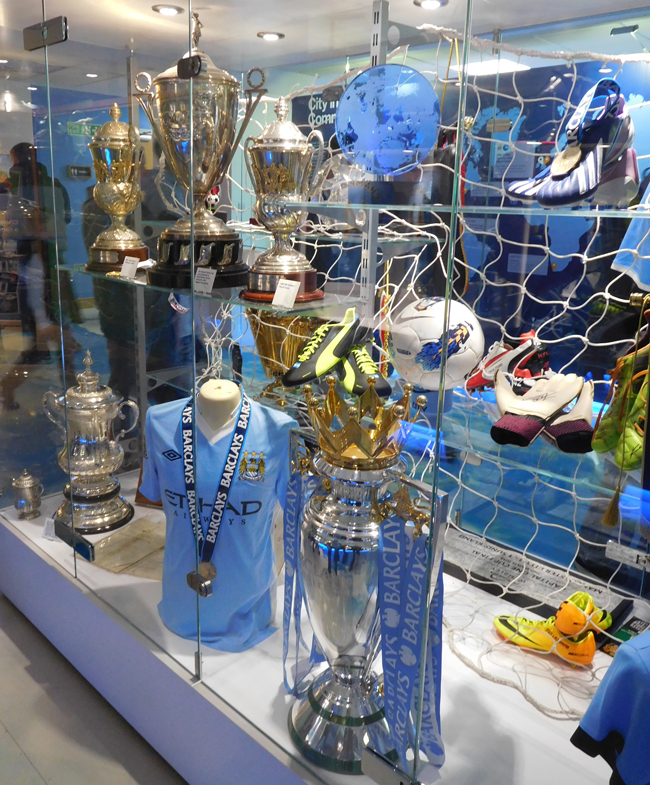 I’ve lived over here long enough to know when I can get away with calling it soccer. One of those times was not on the day we took the stadium and club tour of Etihad Stadium – the home of Manchester City Football Club – I definitely had to call it football, lest I thoroughly embarrass one of their long-standing, long-suffering fans.

I grew up as a rugby league fan, supporting the Brisbane Broncos through many years, mostly successful and some not-so-flash. I can understand a fascination with sporting prowess, enjoying a game and feeling adrenalin pumping while watching from the stands or even in front of a TV thousands of miles away from a game. That’s always been the ‘footy’ for me – hard hits, pile-driving tackles, galloping runs and giving the opposition the slip to score from your own half. Crafty halfbacks and five-eighths, towering prop forwards, flying wingers and reliable fullbacks. I’ve got signed jerseys, caps and flags in all shades maroon. That’s what you get growing up in Queensland, prime cane toad country. These days, I barely hear a whisper of league games and news, living outside Northern England, sports news pays it no airtime.

Marrying into a family of representative football players, coach and ardent fans, I’m glad they haven’t felt the need to force me to understand the off-side rule. Nor strenuously encouraging me to choose a side – with no less than three different favourites in the close family, best not to get involved. I’ll just wait until the Socceroos are playing and annoyingly call it soccer again.

On the same weekend we enjoyed Chester Zoo for my birthday, we joined the Club and Stadium tour, guided by an even keener volunteer, starting outside, through the dressing room, training room, media room, trophy room, the Chairman’s Table in the swanky bar, out for a sit down in the pricey seats, up the tunnel to pitch-side and along the terraces where the common folk have to line up for a beer.

As an outsider, the history, stories, personalities and statistics were actually quite interesting. To learn about the work they do with children, community involvement and be able to get into all the normally off-limits areas helped to show the club’s substance beyond the egos on the pitch. The fact the owner’s table is not closed off to supporters (rich supporters who can afford a pint in the swanky bar, but ‘regular’ supporters nonetheless) and he’ll mingle on game day.

There have been some great players to come and go through the ranks and for me, the legacy of Bert Trautmann takes some beating. Former Luftwaffe paratrooper, taken POW and transferred to Lancashire, he refused repatriation and stayed in St Helens, eventually playing goalkeeper for MCFC from 1949-1964. It would have taken some gumption to stick around in the face of opposition so soon after WWII, and he certainly met a lot of protest. Silencing the critics with his skills included sustaining a broken neck – and playing on – during the 1956 FA Cup Final. As is one of the admirable effects of sport, anyone can be applauded for great skill and sportsmanship and he went on to be awarded for his sporting achievements and with national honours from both Germany and the UK for his work in healing Anglo-German relations.

I may still not understand the off-side rule – let’s face it, I never will – however I can appreciate a club with a long history that makes my girl shout at the television on the weekends.