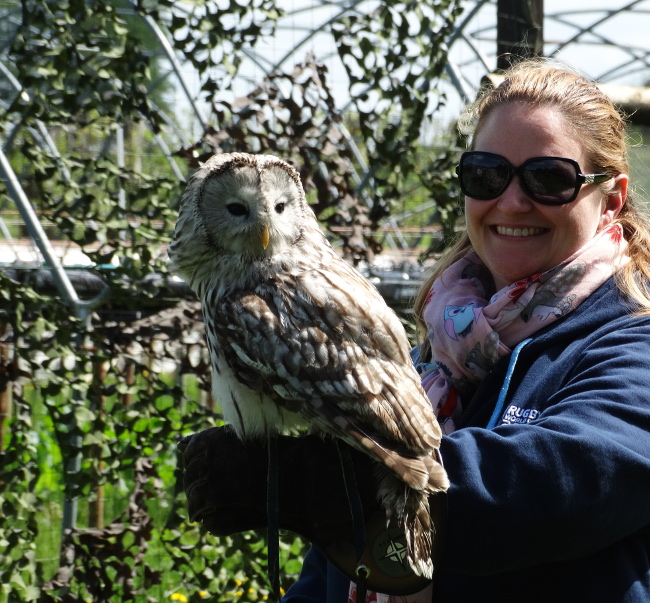 I envy birds. They have the superpower I would love. Flight. A hands-on experience at Millets Falconry in Oxfordshire was a lovely, heart-filling, birthday surprise. Owls, eagles, buzzards, hawks, caracaras, kestrels, falcons, kites and vultures, with a scattering of ferrets and reptiles for good measure basked in the morning sunshine.

A thoroughly informative talk by James the falconer was accompanied by the placid birds taking up perches on our thick, leather gloved forearms, toning our biceps a little as they get heavier and heavier on an outstretched arm. We even met the newest member of the family, a white fluff-covered ball with a menacing beak and beady eyes.

The experience then involved moving out to a small field, arranging ourselves into a circle so the birds could swoop between us to take bites of food from falconer Luke – we kept the thick gloves for their vice-grip claws to hold onto while he calmly placed his naked fingers up for them to grab their treat. That’s why he’s the falconer and we’re the paying tourists. Another reason Luke’s the falconer and not us is because he was the one climbing the bordering trees trying to coax a bird from the trees who didn’t want to play anymore. Problem was he was going to be delivering rings for a wedding later that day so really needed to find his motivation before 3pm…

The birds could sweep past, fluttering your ears with their wing tips before you knew they were coming. Prey birds are basically feathered ninjas. I copped a couple of swipes to the back of the head as they took a dive and a swoop between us. Endearing and a little unnerving.

After the birds were full and back in their enclosures we joined the crowd for flying falcons and greedy caracaras. The speed and precision of the falcons was stunning, chasing the lure and wheeling away on a dime like they had been knocked sideways by a bus. Darting and spinning, how they can manoeuver at such speed would leave a fighter pilot gasping for blood flow to the brain.

I had already met the characterful caracara in South America. Their flip top head is comical when they call – just about folding back on themselves and letting out their guttural calls. The dude at Millets Falconry was adept at tipping over plant pots to get to the meaty morsels hidden underneath and wandering among the legs of us in the audience. Fearful of humans he was not. Like I said. A dude.

Any day spent in the company of animals is a good day. A very, very good day.