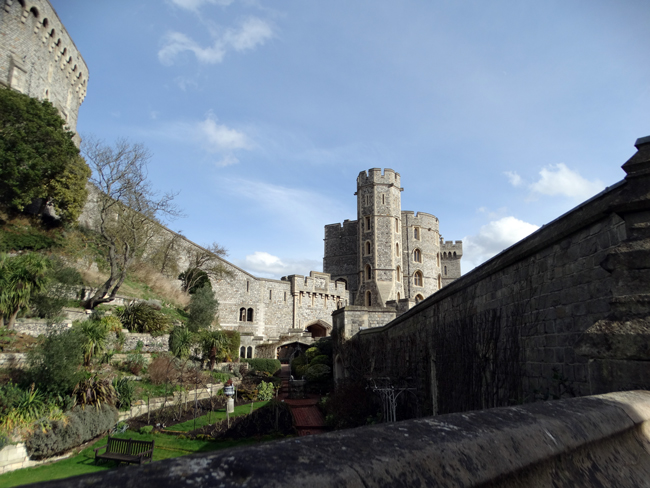 One of my cherished childhood possessions was a wooden ruler with the English monarchy listed since William the Conqueror. While it was useless for taking precise measurements, it was perfect for sparking a lifelong interest in history and imagining how the other half lived during their reigns.

It was probably not a big surprise I was thorougly excited to be treated to a visit to Windsor Castle for my birthday this year. Alas, the Queen was not on hand to personally congratulate me on looking so good despite my advancing years. I guess she’s fairly busy.

I was very surprised – and impressed – by how far and wide us mere plebs could roam in the castle grounds, poking our noses into galleries, reception rooms, halls and more with only some polite staff on hand to answer questions and the occasional bobby. Given the value of art and furniture and the VIP-ness of the residents – and with the world climate – I was surprised not to see more armed police, CCTV or more areas off limits. Or it actually was all there but I was too busy being overwhelmed to notice any intrusion. Without pulling up the drawbridge and closing themselves off to the world, the royal institution showed to me that they’ve learned from previously hiding from their subjects, and there isn’t much would scare them. Or it could be purely economics – averaging a million paying visitors a year makes for a lucrative income stream.

I don’t have photos from inside, no-one does unless they’re official, which actually helped to take it all in without the blinkers of a camera view-finder. The audio-guide gave everything a flow and it was a very easy way to lose a few hours. Walking into St George’s Hall – used for banquets for the Queen’s own Order of the Garter was dramatic. Family coats of arms from all the knight companions who have been in the Order over the years cover the walls and ceiling, their names listed on wooden boards along the sides. Gazing up my jaw dropped and my heart skipped as I recognised one. I found a lovely lady with boxes of binders listing all the names. I was right – there were TWO Fortescue’s in the Order of the Garter, so there’s two Fortescue shields mounted in the hall. Now ok, so we’re not closely related, but I was still chuffed to see a family name in such surroundings. Later, in St Georges Chapel, we were allowed into the stalls reserved for the knight companions and found two Fortescue shields again, in seat number 24…two up from Churchill who would have been a contemporary.

From Queen Mary’s insane Dolls’ House to the staggering array of original armour and weaponry, each room presented yet more and more of the pomp and ostentation expected of royalty. So many pieces you would expect to see in museums – faberge eggs, fine china, gold ornaments, tapestries and even Henry VIII’s last suit of armour and portraits of past kings and queens. I had to remind myself over and over of where I was – to realise I wasn’t in a national gallery – as I recognised portrait after portrait from my school history books. Well of course these are the official and original works commissioned of previous rulers, they’re just also essentially the same as you or I framing a family photo and putting it up in the loungeroom – except these family pics are all over the history books and documentaries everywhere. Yes, you have definitely seen them before.

Within the walls of the sprawling castle grounds is St George’s Chapel, where the royals go to church and we could walk all over Henry VIII – always the showman he’s buried with third wife Jane Seymour under a very large stone in the aisle leading to the altar. With nine other sovereigns also entombed in various places in the Chapel, it’s probably not short of funds to fix a crumbling steeple or install heating like some tiny country churches dotted around the country. Somehow I don’t think they pass a plate around to collect tithes.

We spent the whole day roaming over the grounds, strolling through the rooms and gawking at the breathtaking displays of wealth. Windsor Castle is the oldest and largest inhabited castle in the world and has been the family home of British sovereigns for almost 1,000 years ever since William the Conqueror laid the foundations. It is still very much a working royal palace and home to around 150 people – one of whom I saw putting his rubbish out.

With everything I stared at with wide eyes and gaping mouth while wandering the castle’s historic rooms or learned through the years since I got my treasured wooden ruler – I still don’t believe I have any idea how the other half truly lives.