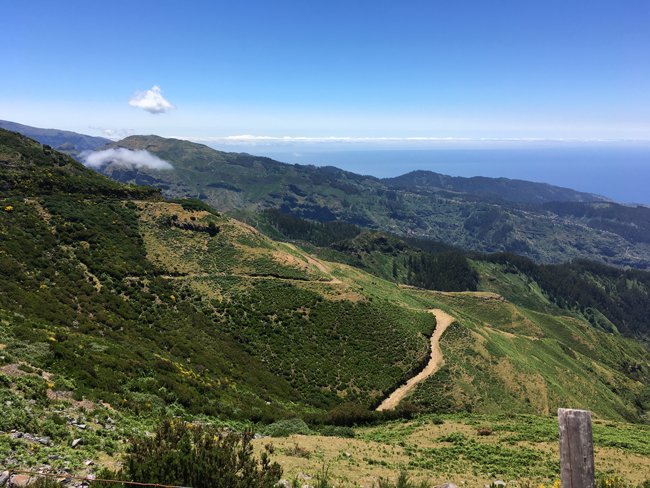 If flowers, sunshine, fluffy clouds and patriotic cannonfire are your thing, Madeira was made for you. As far as first impressions go, my first foray into Portugal offered up marvels of engineering, a myriad of natural landscapes, mind-bogglingly steep and twisting roads and many reasons to return.

Making our way from the airport to our base for the week – Vila Brava in Ribiera Brava – took us through just a fraction of the tunnels circling the island. With its soaring hillsides, distinct lack of flat ground, some forward-planning and probably a whole-lotta-cash, the road network dives in and out of tunnels and rides aloft high bridges to create a smooth and well-maintained and definitely impressive highway network. With main roads cutting under the exposed hillsides, houses, farmland and industry is allowed to flourish and the natural geography isn’t sacrificed to the gods of progress. In hindsight we wished we’d counted how many tunnels we took, then again, we’re convinced we would have lost count anyway.

Off the main road however, the driving is a little hairy with tight twists and surprising corners, upward climbs wringing the guts out of the rental car and steep descents testing the brakes. Oh and don’t forget to carry a large rock around to help your car stay where you park it and not roll down into the sea. In the end the only trouble was a flat tire on relatively flat ground. Go figure.

Our days consisted of a mixture of breakfast on the large terrace, making full use of the sunbeds and clear skies and journeys to the far reaches of the island. Our second day was Portugal’s national holiday and surely-not-entirely-safe-in-untrained-hands firework bangers served to punctuate the peaceful silence. Gas bottle deliveries were announced with calls from a loudspeaker mounted to the delivery truck which also made it easy to blather on incessantly during the said holiday instead of delivering gas bottles. As the hillsides throw echoes off each other you can’t quite tell which direction noises are projecting from, but you can hear them far sooner than you might wish. The booming bangs only gave away their location from the puffs of resulting smoke on a neighbouring hillside a few seconds after the reverberation clanged. At least they started all their shenanigans well after we were awake.

Our trips took us all around Madeira including the less-sunny north side, windblown capes, through groves of unexpected eucalypts, dense fog that evoked memories of our travels through Dartmoor, over the tablelands at the top of the peaks and presented spectacular views of green tumbling down into the deep blue. Roads everywhere are lined with blooming blue and white agapanthus, roses and more – the flower island indeed.

Funchal is a large and busy city, bustling with tourists on the day we happened to visit, ill-timed to coincide with a visiting cruise ship. By this time I’d developed the worst sinus infection in living memory so we sought out a pharmacy before wandering the alleys of the old town, along the harbour front complete with replica ye olde worlde galleon which these days is apparently perfect for day trips and booze cruising – Sir Francis Drake’s contemporaries would be so proud.

While trying to soak up the old time ambience of the cobbled, narrow streets and passing restaurant after souvenir shop and associated encouraging hassle it became apparent we’d been spoiled with our secluded apartment on the far outskirts of Ribiera Brava. We gave up on the cobbled charm and headed back to the main street to stroll back to the car and back to negotiating the tunnels and turns.

I lost count of the number of times we stopped to admire the view. A purpose-built layby is a good giveaway there is something to see, especially in a land where the roads are interesting. Views over greenery gave way to ocean blue, clouds tumbling down the mountain side and intermittent waterfalls. The island’s geography lets it influence the weather and visits to the north side gave us showers, dark grey clouds and moody mists, while staying on the south gave Julie’s tan a boost and I loved the umbrella on the terrace and the hotel pool – a lot.

A trip to the observatory on one of the highest peaks didn’t look promising when we started out. Clouds lined our route until we were amongst their thick fog, slowing to a crawl on the skinny roads lined with tufts of heather and making us think of Scotland. We debated the wisdom of continuing, figuring the views wouldn’t improve. Just like a Hollywood ending, the sun started to peek through the mist, the clouds evaporated and we emerged into blazing sunshine, the fluffy white spreading out below as we kept climbing. The summit lookout post gives directions to other peaks and their energetic hiking stats – we said no thanks to the goat tracks we could see snaking off to the other peaks poking through the cloud cover. It was a long way to roll should you leave the track. The giant white ball of the observatory anchored a view over immense white clouds and occasional rocky peaks. Yellow flowers flourished on the low bushes and as the clouds moved across we caught glimpses of the tumbling hillsides. It was one of those moments you remember the world really can be beautiful when humans leave it alone.

Ponta do Furado is a stunning vantage point snaking away from the island out to the east forming a vast rocky point. From the ochre coloured cliffs you can watch planes land at the outstretched runway and compare the sunny and clear skies of the southern coast with the misty green northern coastline in a single panorama. The gales are constant allowing only sparse and hardy ground cover plants, and curiously a flowering Scottish thistle, to survive. Taking advantage of the breeze for free power, the wind turbines that dot the island gathered a little more plentufully here.

And if we thought the roads were interesting, the airport is pretty cool too. Half the runway is built on enormous stilts and reaches out over the water to make the distance. The winds often make landing and take-off impossible – indeed when we were all boarded and ready to leave for home we were kept waiting for half an hour for the winds to drop below the threshold. Not-so-secretly, if it had meant we were delayed an extra day or several due to high winds, we really, really wouldn’t have minded. Madeira made her mark and we would definitely go back for more.