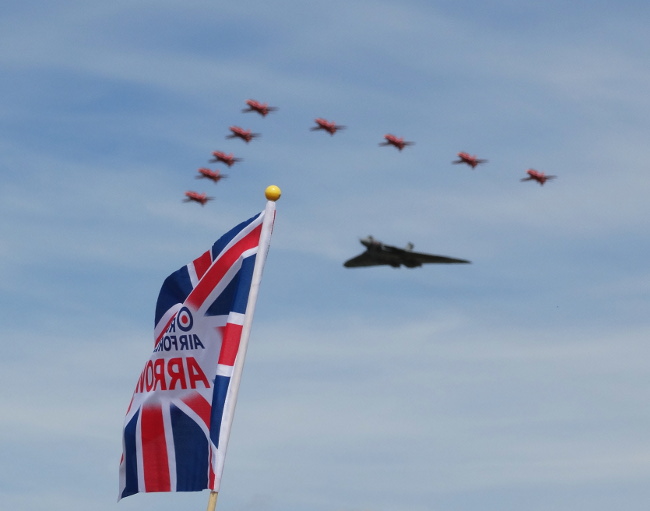 Growing up the daughter of an air traffic controller it probably shouldn’t come as a surprise I can still remember being bitten by the air show bug when I was a pre-schooler. We’d packed a lunch and sat on the frankly unsafe balcony circling Cairns Airport tower and watched them come and go on the runway and craned our heads skyward as they zoomed overhead, squinting into the far north Queensland blazing sun.

Different times, folks. These days the viewing area is strictly not up ATC towers so it was just as well we packed camping chairs for the Royal International Air Tattoo at Fairford back in 2015. Without the human propensity to regularly go to war, advancements in aviation wouldn’t happen. While I can marvel at the adrenalin-inducing displays of a good air show, I can assure you it’s not lost on me that first and foremost, these machines are built with destruction in mind. On this day though, the whine of jet engines and thudding of propellers overhead was purely a show of grace and thrills and I felt like that little kid again, plane gazing, jaw frequently dropped all day.

We arrived before the gates opened, tied a bright orange shopping bag to the car aerial so we had half a chance of finding it again at home time. The coffee vans did a great trade with several hundred other plane crazies forming long queues up to the entry. Once inside it was easy to be overwhelmed with the sheer number of aircraft on display and the differing technologies on show. Not to mention being gobsmacked to hear bagpipes resounding at the display of the Royal Jordanian Air Force C-130H Hercules. Was not expecting that.

The star of the show was the last surviving (airworthy) – and imminently retiring – Vulcan XH558, a sleek and screaming product of the Cold War. The bomber was Britain’s first nuclear deterrent and undertook the longest raid in British military history. Since RIAT I’ve watched Guy Martin’s Last Flight of the Vulcan Bomber – catch it if you can.

So many mesmerising aerobatic displays…next time I’ll just buy the DVD so I don’t worry so much about capturing it all myself, there is just too much to see and not enough camera battery and memory space! Do yourself a favour and get along to a Royal International Air Tattoo at least once, it’ll stick with you as one of those magical days…with a slightly sore neck 😉

You can see more of my stunning amateur filming attempts at capturing some of the days highlights on my YouTube channel.