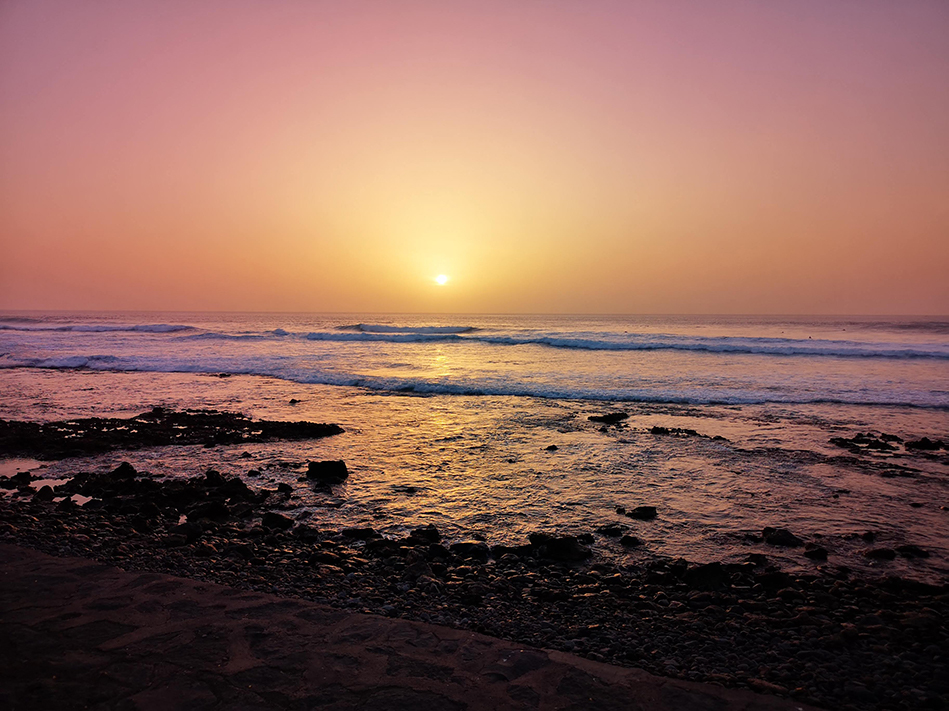 As an Aussie expat living in the UK, I’ve come to understand the fascination with ‘winter sun holidays’. It was a strange concept for someone raised on an average of 260+ days of sunshine a year.

So, on the back of winter in the darkness of a post-xmas-lights world, and as a sundowner to my 40th year, we spent a week seriously topping up our vitamin D levels in Tenerife, one of the islands in the Canary Islands archipelago.

Based in a simple and quiet unit at Violet Apartments in the hills of San Miguel, we were a long way from the tat and neon of Playa de las Americas and had the sun deck all to ourselves. The topography of the island is such that you want good brakes and a bit of determined guts on your Fiat 500 hire car, because as soon as you leave the lower coast, you’re only ever going up or down or curling through some impressive switchbacks.

We spent our days mixing up road trips, coastal walks, sunbathing, watching sunsets and surfers, and de-stressing completely in the near-deserted apartment complex.

On the coast below the airport lies Playa de la Tejita, a big, sandy beach unencumbered by the noise of mega resorts and offering walking trails to help you earn that next cerveza. We ambled past people who seemed determined to be uncomfortable just to be extra close to the sea. You’d think with all the wide sandy beach available at Playa de la Tejita it would seem highly impractical to channel your inner mountain-goat to navigate down to the sharp rock ledges jutting out below the cliff top. Indeed it looked like some people were settled in for a long-term stay with BBQs, chairs, shade sails and cool boxes also having made the journey down the rocky drops.

One of the main highlights was driving up to El Tiede, the volcano that absolutely dominates the skyline on Tenerife. Peaking at 3,718m above sea level, it is the highest point in Spain, which I find amusing since the Canary Islands are just off the coast of Morocco and the Western Sahara, rather than on the doorstep of Barcelona. But then, Spain does have a historical penchant for colonising land a long way from the plains of Spain.

The drive took us through pine forests which thrive in altitudes between 1,000-2,000m. With car windows down we were engulfed in their sweet, sticky scent as the needles roasted in the sunshine. Cycling is a particularly popular activity and a true test of your grit, ever upwards they climbed, conquering cafes in their droves at each pit stop.

Some sharp cornering, magnificent vistas down to the ocean before we appeared to cross into the inner caldera of the national park. Once over the lip, we couldn’t see the water anymore and it quickly turned to rock, sand and lava. It was stark in contrast of the pine forests and felt like a prime location for filming a movie about Mars. Our first real glimpse of the volcano was during a rest at a lookout and museum which takes its name from the last person to live in Las Cañadas, Juan Évora Trujillo, who lived in the same traditional way as the shepherds before him who would graze their flocks on the slopes of the volcanos.

If El Tiede is measured from its base on the ocean floor, at 7,200m it’s the highest volcano in the world outside of Hawaii and is defined by UNESCO as the world’s third-tallest volcanic structure. Even for its height it has to be one of the most accessible volcanos around – there’s a cable car almost to the summit. But you’ll have to get in the queue for a permit several months in advance. We were happy enough to drive around the base, Julie’s not one for great heights and swaying cable cars anyway…

The change from the pine forests during our drive up to the low shrubs and volcanic rock in the caldera was breathtaking. The sweeping views spilled in all directions under a brilliant blue sky. Dark red and rich brown rock are set-off against the sunshine-coloured sand, all spotted with the green and grey shrubs.

Cresting the north lip of the caldera we we plunged into tall greenery once more as fragrant pine trees lined the twisting and winding road that snakes its way to lower ground. A few lookouts offer gorgeous scenes of green trees meeting towns before turning to deep ocean blue.

Garachico is a beautiful town with a tragic past. Once the most important port on Tenerife, in 1706 the Montaña Negra volcano erupted destroying the port. Even though the shipping traders moved on, the town has retained its charm and is a hot-spot for day-trippers. We thoroughly enjoyed a lunch stop across the harbour at Mirador del Emigrante at a small outdoor cafe which offered a spectacular view with a standard side order of fried eggs, chips and salad with everything.

The major tourist drawcard is Playa de las Américas. A long sunny strip of volcanic beach, surfing spots and a plethora of resorts, timeshares and hotels while restaurants, shops, ice cream parlours, kids arcades, bars and clubs jostle for the tourist euro. We spent a few hours strolling the walkway, stopping for lunch, a spot of shopping and a proper coffee. We watched surfers do their best while sun-worshippers tried to flake out on sun-loungers crowded around hotel pools as animation teams and bad DJs assaulted anyone in earshot with noise they called music. Pipe down dude, it’s only noon!

It’s easy to see why this place has grown such as it has, the attraction to the sunshine, surfing and island vibe fills a full dose of vitamin sea.