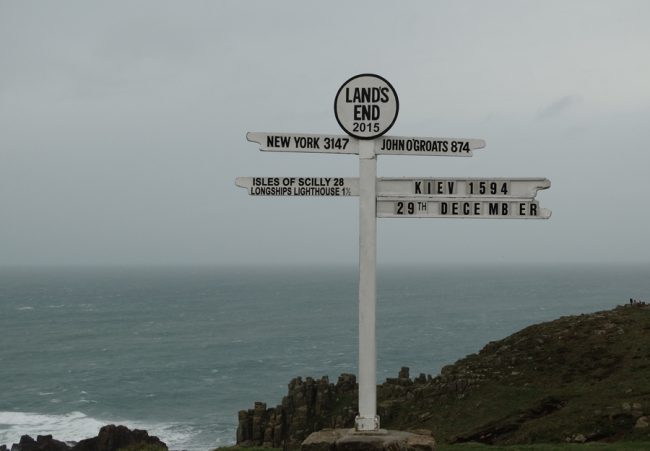 While a road trip to the end of the land in the UK is probably foolish considering the cold winter weather, it does mean less caravans chocking the even-narrower-than-regular-skinny-English-roads, which is admittedly worth carrying a heavy jacket and umbrella every time we stepped out of the car and plastered our faces with gritted smiles braced against the wind to “just take the flipping photo already!” No really, it was so worth it.

To see out 2015 we took a three girl’s road trip with a bag of snacks and inside-the-car into outside-the-car shoe changing rituals at each stop to soak up stunningly predictable grey skies and rain, lovely B&B’s, ancient castles and world famous landmarks.

Making an early start from home we headed to Devon and the moody Dartmoor National Park. The weather treated us much the same as our previous visit, menacing clouds and wispy fog, cold rain sprinkling our faces. On the plus side, the horses we saw were healthy and upright, a welcome improvement on last time! The rolling hills were a carpet of khaki, olive green and rusty orange, while the dark grey of the granite Tors jutting skyward punctuated the sweeping horizon with force and grandeur. Parking up and changing shoes we clambered up the soggy grassland to the base of Hay Tor, sheltering in the mammoth boulders against the rain to watch the fog whip and race between the rock and tumble down the other side, past the grazing nuggety Dartmoor ponies who fear nobody and care even less. We stopped by the River Dart at Dartmeet where a car park had been conveniently placed next to a perfect-postcard-picture of the water rushing under an old stone bridge. Very handy.

We continued south to Plymouth on the coast and made it with a little bit of daylight left to let us wander down to the Hoe which is probably an asset for local residents on a sunny day for basking and getting some fresh sea air as it charges up and around the towering red and white lighthouse. Walking past the Lido gave us a nanosecond to contemplate and then completely abandon the idea of taking a dip in the wind-whipped waters below. We traipsed around the high walls of the imposing Royal Citadel and city-guarding canons, the dark stone and metal blending with the cloudy grey of the encroaching evening. The bright lights of the Mayflower Steps in the Barbican beckoned us closer for a photo op before we searched out a place for dinner. The Barbican Pasta Bar was the perfect antidote to the rain starting to fall and cold seeping into our bones.

We waddled off dinner walking through the historic alleys and skinny streets back to the car and left Plymouth for the dark roads out of town to find our B&B near Looe. All I can say is thanks very much for sat-nav as the pitch darkness and driving rain by now made things rather impossible to see. We finally found The Snooty Fox B&B after driving past it then managed to find our way to a lovely room with a bathroom big enough to literally swing a cat – though we’re not condoning such mistreatment nor did we have a cat on which to prove this theory. Even though it’s highly possible we’ve all never been so worn out from such a mammoth day, the evening continued with pyjamas, warming cups of tea, trashy TV and swiping left or right on dating apps. Well for some of us anyway 😉

After various accusations of snoring and plaintive denials we enjoyed a great breakfast and chat with the former-London-dwelling owners. The sunshine had arrived and the views over the countryside were gorgeous and put a spring in our step as we drove down to check out old-time smuggler’s haunt, Looe.

Even with an early start we had around 180 miles to cover for the day…which may not sound like too much for a whole day, until you realise this was to include several of those miles on the skinny, tiny roads of Cornwall – the reason we have sworn we wouldn’t want to try the trip in summer with campervans joining the fray. The road one must follow to reach the famous signpost at Land’s End seemed to keep stretching further and further, getting narrower as if we were being physically squeezed into the tiny tip of the land. This was in stark contrast to the very large, not-free car park and grand entrance hiding kitschy gift shops and garish amusements which were mostly mercifully dormant during the winter so couldn’t over-charge us for taking photos of a coastline. Zipping our jackets up to the limit and foolishly trying to keep our hoods up against the wind, we wandered the paths with surprisingly more similarly-minded winter tourists than expected and fought our way against the howling wind.

When we were finally all blustered out and once more ensconced inside the warm car – with inside-the-car shoes on of course, we traveled up the north Cornwall coast’s main road into the land of ye olde worlde with a stop at Tintagel.

“Tintagel” is a word I can remember my parents uttering after they returned from a trip long ago to the UK and Europe. The mere word conjures up a mystical place in my mind, completely befitting the crumbling, ancient and haunting castle perched halfway up the cliff side and outcrop it still clings to today. Wandering through the surprisingly substantial remnants of a completely different era we were very grateful for modern fabrics and windcheater jackets. The thought of seeing out a fierce winter with lashing seas and screaming winds with only wood fires and animal skins for warmth is enough to make anyone grateful to be witnessing such a grand structure from behind a camera lens. Rough, dark walls, piled thick with thin slates of rock still stand against the elements, their tiny windows offering a perfectly imperfect frame for the grey seas beyond. On a drier day I would have made the sketchy looking journey across the rope and wood bridge linking the mainland and rock outcrop hosting the other half of the buildings. But it was wet and windy and quite frankly, I didn’t plan to die early or at least break something important by plunging to the hard wet sand, just far enough below to probably make it very painful.

Leaving Tintagel we followed a suggestion from the B&B owners that Boscastle would be a nice stop along the north Cornwall coast. It’s a small postcard-perfect hamlet with rushing stream, narrow inlet and harbour, Museum of Witchcraft and numerous gift shops with beautiful pieces that you never knew you needed until falling in love with them on the shelves.

With the damp, windy weather we did the obviously thing and took a walk outdoors. Following the road down to the harbour we passed beached wooden boats in the inlet and mossy walls dripping with rain water. Rounding the final corner we could see out to sea, the roiling waters trying to force their way into the harbour and being pushed back by the rocks and stone barriers. As the water surged there would be occasional lulls just as the water blasted out through a crack in the cliff wall from the open water on the other side and flung the white water into the inlet. On a calm and sunny day Google Earth would have you believe this is a gorgeous, vibrant and invigorating view on the Cornwall coast…on the day we visited it would have been a perfect setting for a battle in Game of Thrones.

The sea air certainly inspires an appetite and how on Earth could we visit Cornwall without sampling a Cornish pasty. The top tip was the Boscastle Farm Shop on our way out of town. Oh mannnn it was Delicious!

Our final night was in Bude – again it’s probably a simply delightful location on a bright sunny day, and on the night we stayed the whistling wind would have whipped the camera out of our hand. It was absolutely howling. All night. Even the fire alarm went off in the middle of the night which made me jump faster than I’ve ever done. The An Mor Hotel was gorgeous, funky, with an amazing breakfast and a glass floor showing off the fully stocked cellar next to reception was unnerving to stand on!

The last leg was to surprise Julie’s mum by dropping in on her in Gloucester and inviting ourselves for a sleep over. To be able to sleep in a familiar bed was comforting after a few long days on the road. As I look back through the photos I see grey, leaden skies and our wet, windswept hair pasted to our faces. But we are smiling through the rain and that’s all that matters – it may have been raining the whole time we spent at the end of the land, but it wasn’t the end of the world.